This is how to stress your server and computer with HeavyLoad.

Systems must run smoothly all the time. No matter if we are talking about server hardware or your gaming PC. To avoid unforeseen consequences, we developed HeayLoad. With our free stress test tool we can push your system to its limits. While HeavyLoad performs the hardware stress test, you can execute your very own tests on your system to check if everything still runs fine.

But to make sure your stress test is valid, you need to pay attention to some rules. We put together our top 5 tips for stress testing your system with HeavyLoad.

Stressing server hardware over an extended period of time

Are you distributing hardware for computers and servers? Then you should make sure all your components will work under high load before delivery. HeavyLoad helps you to bring your servers to their limits for hours at a time, for example. Doing so, you can check out if your hardware overheats or causes other problems. 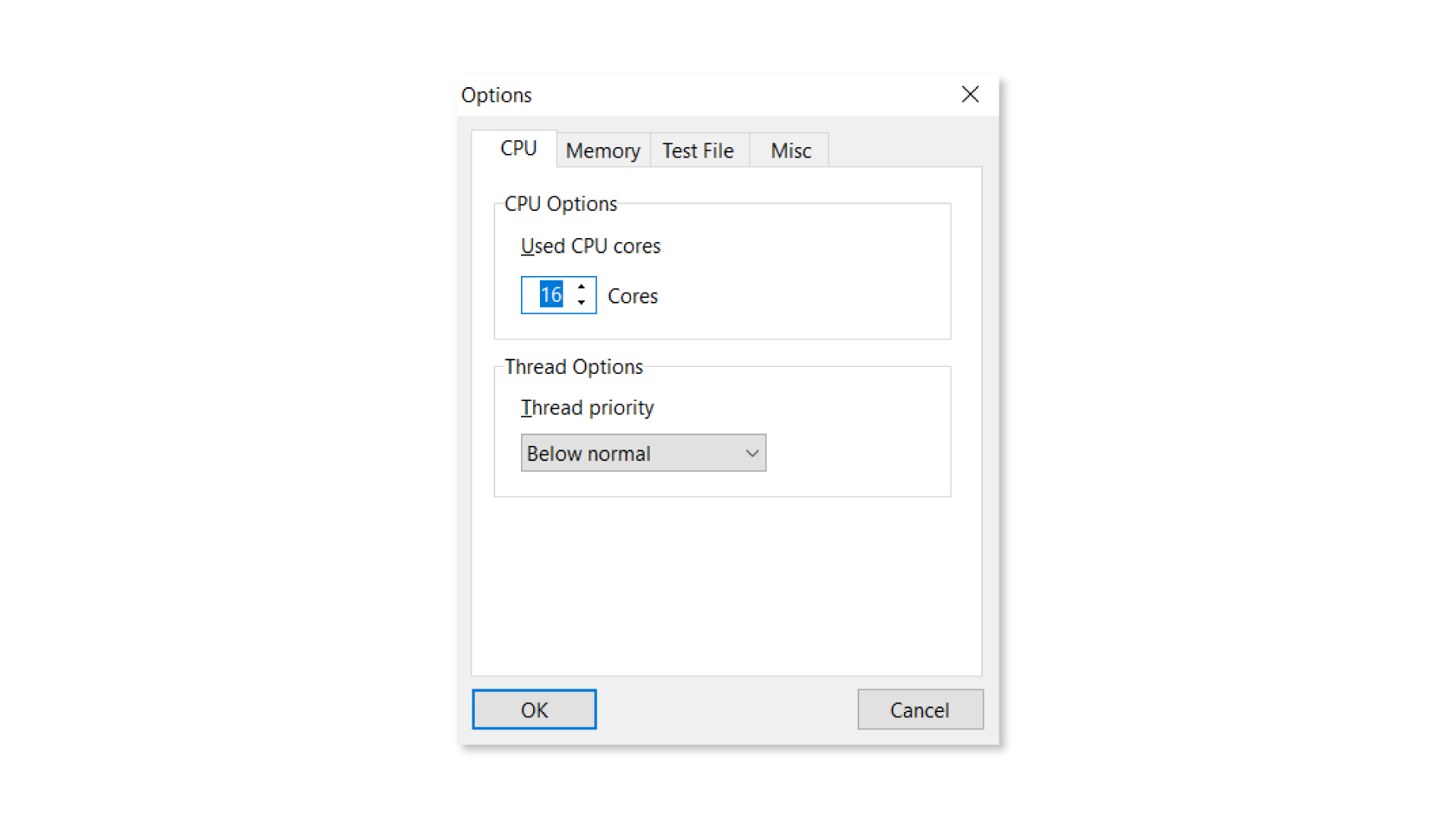 Select „CPU Stress“ and configure the test further in the stress options. Here you can determine the used CPU cores and the thread priority. 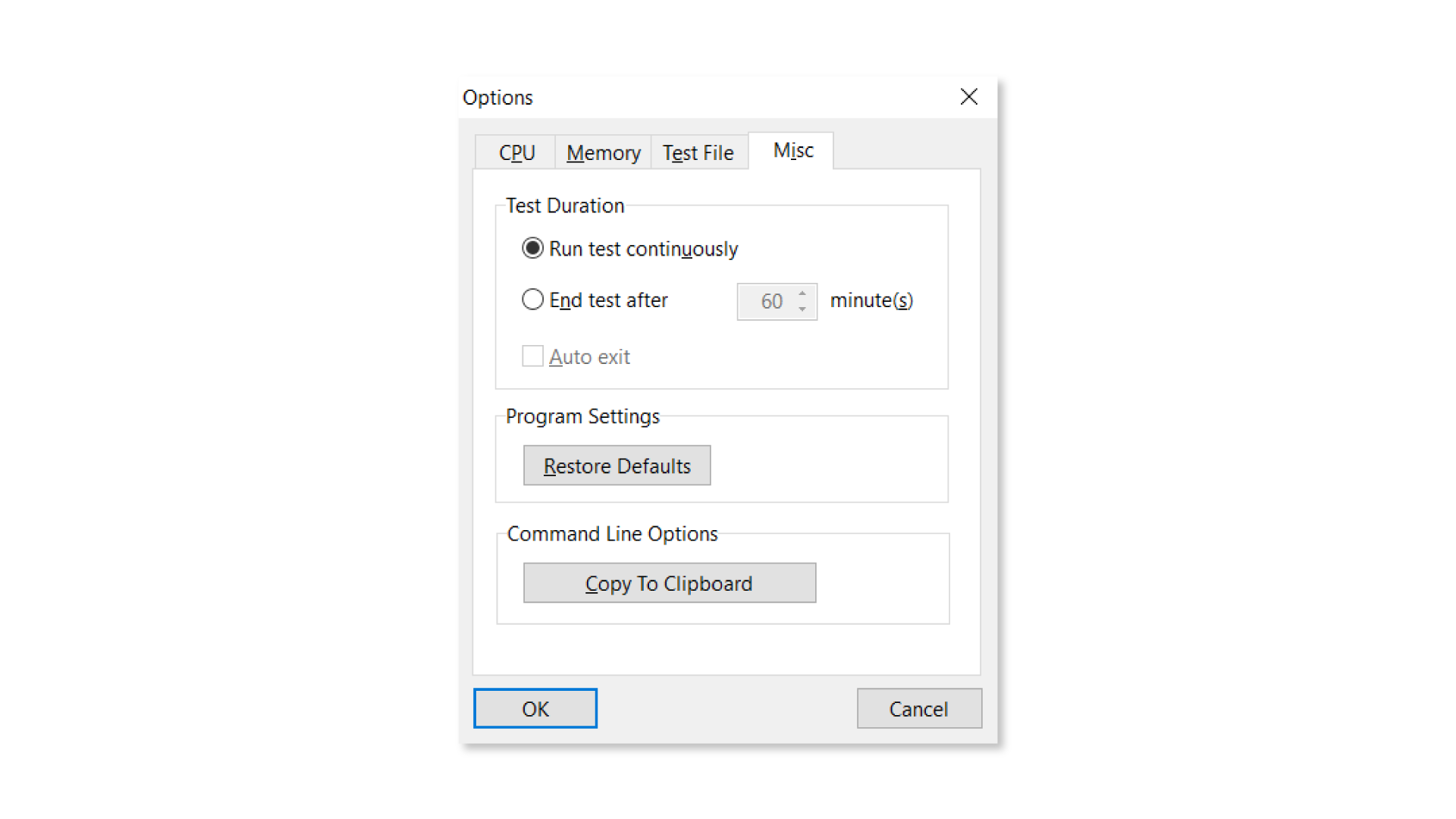 If you want to completely load your server for a longer time, let’s say for 24 hours, you should define a test end. That way you can measure the exact test duration afterwards. Choose the “End test after” option in the “Misc” menu and define an individual test end in minutes. Here you can configure wether HeavyLoad should „Auto exit“ right after the test, too.

Do you know how your system reacts when your free disk space is getting less and less? That’s something you usually only learn the hard way: Once the company server is full, performance issues disturb your employees in their work. Once that happens, it’s already too late to react. 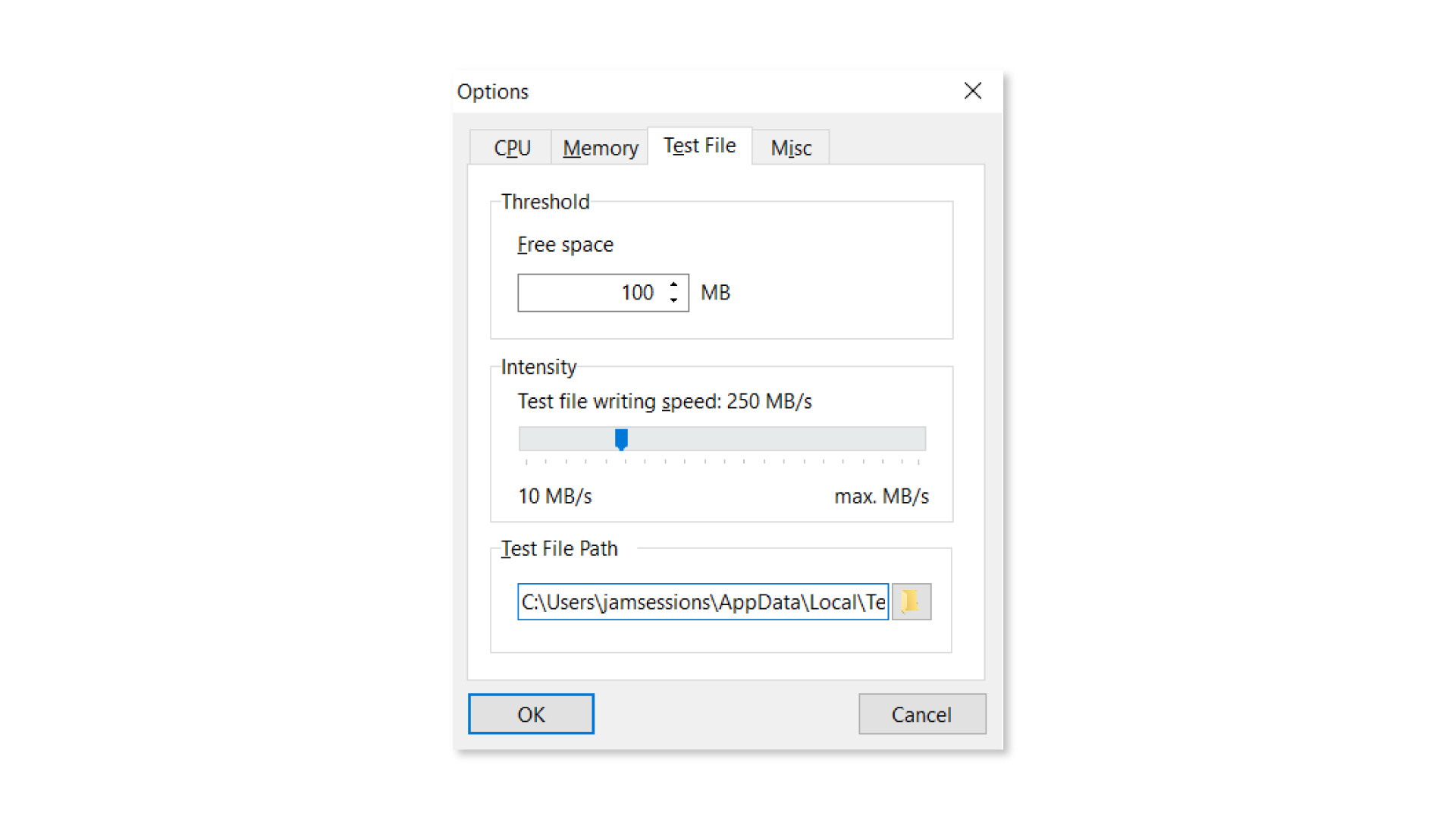 In a clever stress test procedure, HeavyLoad can simulate low system disk space by creating a test file at a desired destination. HeavyLoad allows you to configure the writing speed of the test file. You can also define a threshold by configuring the free disk space that should remain. 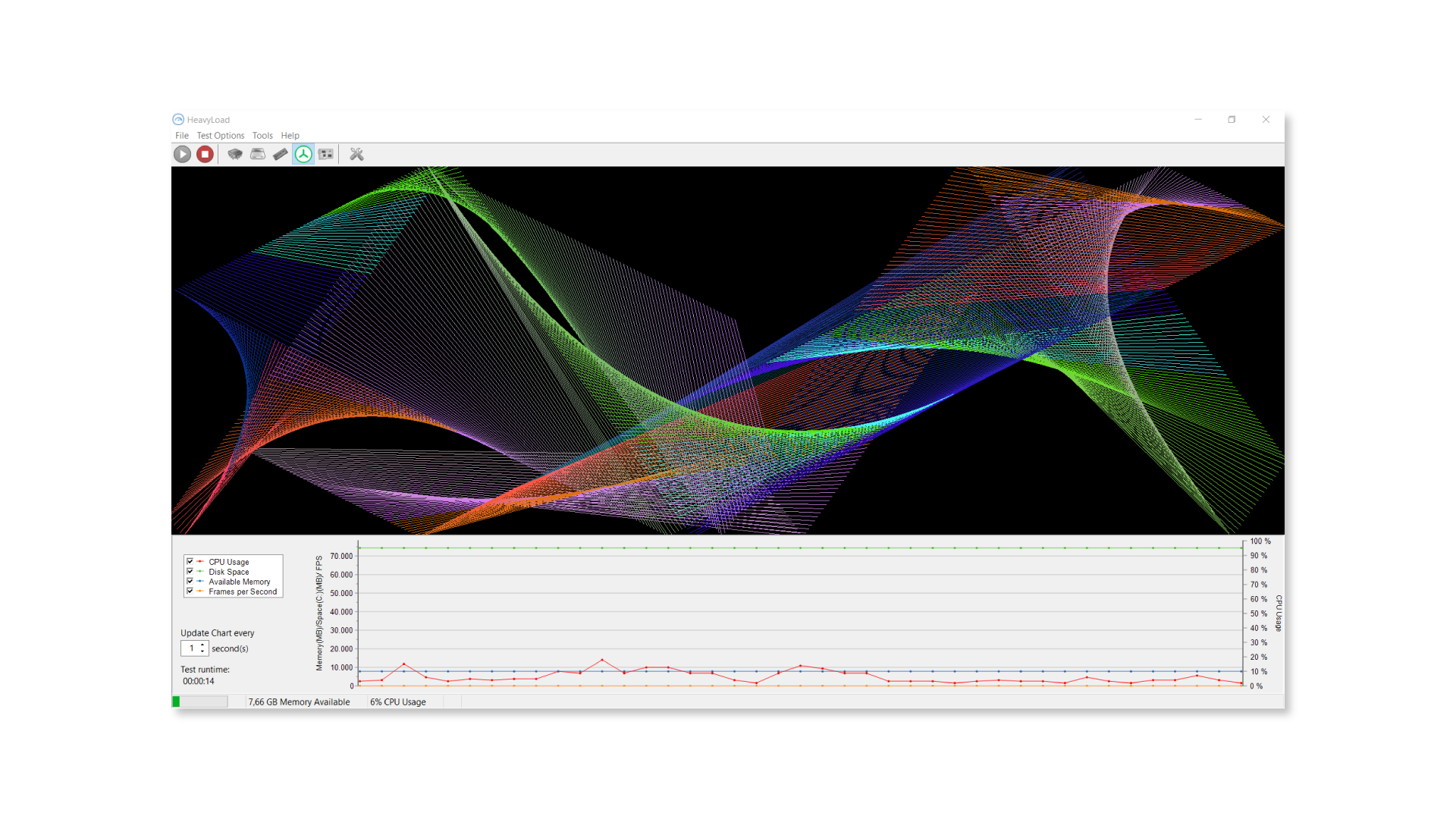 Our free stress test tool can simulate a high amount of disk accesses as it can also occur in everyday business. For that, we integrated our disk space manager TreeSize Free inside HeavyLoad. TreeSize Free imitates a high access rate of files and folders on your local hard drive.

How to put an eye on your disk space regularly: When your hard drive is full, it’s too late already. That's why it's better to take precautions and keep an eye on your disk space with TreeSize Professional. With TreeSize you can scan local drives as well as servers and find space wasters. Try it for yourself with our 30-day trial, completely free and without registration!

Can you still remember the times when 2 gigabytes of RAM could only be imagined in the distant future, if at all? That was a long time ago. Today, 8 gigabytes are already too little, 16 gigabytes of RAM is becoming the standard more and more. You don't have to worry about full RAM anymore, do you?

But with increasing RAM capacities, applications are also becoming memory-hungry - especially if you or your employees run many programs on the computer at the same time for their daily work. With HeavyLoad you can simulate a full run of RAM on your system. And that completely individually: 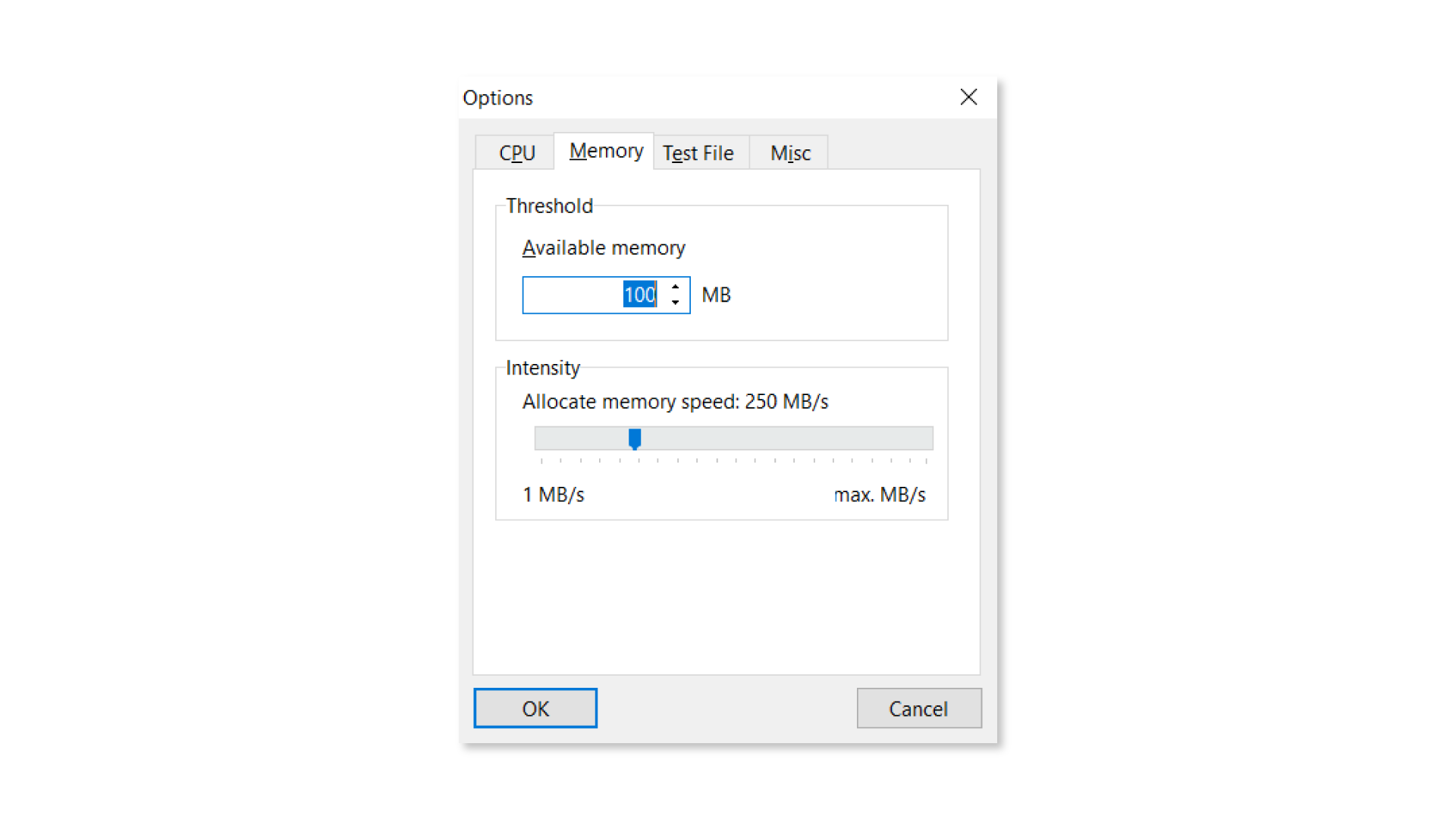 Configure how much memory space should remain and define the speed HeavyLoad allocates memory space. Open the HeavyLoad options and choose the „Memory“ tab. Here you can set thresholds and intensities. Next, minimize HeavyLoad and play through various realistic scenarios while your system is under full load.

Practical use case: Doing a RAM stress test can be beneficial on various systems. SQL servers, for example, might react sensitive to decreasing memory space. With HeavyLoad you can put your SQL server to the test.

Always have HeavyLoad mobile with you

You are not a fan of installing too much software on your system permanently? No problem: We offer a portable version for HeavyLoad, which you can store on a USB stick, for example. This way you can take HeavyLoad with you, ready to use, without having to install our tool on your computer or server.

Pushing your gaming PC to the limit

Besides professional use cases at work, HeavyLoad is also popular with gamers. Many passionate gamers assemble their hardware components themselves and build their gaming computers from scratch. But is the built-in cooling sufficient for gaming, so that nothing burns out?

HeavyLoad gives the answer. In addition to the processor stress test, include a GPU stress that pushes your computer to the limit. That's because HeavyLoad lets you run all the existing tests at the same time. For example, you can check the stability of overclocked hardware components in addition to your PC cooling. This allows you to detect instabilities or temperature problems early on - and not just in the online match.

Good to know: Graphics cards are becoming more and more performant. Reason enough for us to go one better with HeavyLoad. In the next version of HeavyLoad, we'll be tweaking our GPU stress test even further, so that even high-performance graphics cards can be pushed to their load limits. We’ve got you covered with the HeavyLoad changelog site!

Summary: How to stress your system

So let's summarize once again. HeavyLoad is suitable for various test procedures with which you can push both server hardware and PC components to the limit. The customizable stress test is run in the background while you perform your own tests on the system.

The free HeavyLoad tool has a CPU and GPU stress test, can simulate disk usage and disk accesses, and artificially reserve memory. With this, you are ready for anything. Try it out for yourself! 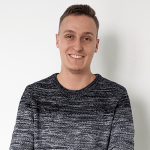 How dangerous is malware for your company?